HMRC has just released a brief explaining that the introduction of the domestic reverse charge for construction services will be delayed until 1 October 2020.

In 2018, ICB produced a series of articles on distance selling and how to cope with VAT when dealing in Business to Business transactions with other EU countries including an explanation of how the reverse charge system works. HMRC have now issued guidance on the major changes that are to take place from 1 October 2019 in the Construction Industry within the UK which introduces the concept of the domestic reverse charge (DMS). For many of us, it will be the first time we have needed to consider the rules that govern this.

This guidance applies only to VAT-registered businesses that operate within the CIS. The system does not apply if the supply is zero-rated (e.g. for a new build) but must be implemented for any standard and reduced rate VAT invoices. What does and does not fall within the DRC is listed in the guidance from HMRC which can be found from the link at the end of this article.

What is the domestic reverse charge?

Basically, it means that any VAT registered sub-contractor operating within a chain of suppliers will issue their invoices with no VAT charged but with a message on the invoice that states the relevant information on the reverse charge. The final invoice to the ultimate customer does not fall within the DRC as VAT is charged on the whole amount, even if the customer is VAT registered and is registered for the CIS itself. The guidance does give advice on how to determine which business in the chain of supply can be considered to be the ‘end-user’ and hence outside the DRC.

Let us consider how the system works at present. Consider a very simple chain of suppliers that operates within the CIS as follows:

The main contractor has quoted the customer (the ‘end-user’) for a job that will fall within the CIS for (say) £3,000 plus VAT but needs to sub-contract out some of the work to the sub-contractor for a fee of £,1000 plus VAT. Invoices are raised and the VAT is dealt with as follows (note we are concentrating solely on the VAT element of the invoices, ignoring any tax that is deducted at source under the CIS for the purposes of this example).

The following tables show the movement of invoices and payments, including VAT, and the end result for the net VAT paid to or reclaimed from HMRC at each stage.

The sub-contractor invoices the main contractor £1,000 plus VAT at the standard rate.

The main contractor issues an invoice to the customer for £3,000 + VAT at the standard rate.

The net result is that HMRC receives £600 net in VAT which is the amount of VAT charged to the final customer.

Under the DRS system, the sub-contractor will not include any VAT on their invoice but should add the words “This invoice is subject to a reverse charge for VAT”.  The invoice should also show how much VAT is due under the DRC but is not a part of the calculation of the final amount due.

The main difference between the existing system and the new system is that as the supplier does not charge VAT, they do not show any VAT on their returns to HMRC; however, the value of the output itself will appear in box 6 of the return.

As the VAT is both paid to and then reclaimed from HMRC, the net VAT due to HMRC at this point is still zero. The only difference is that this time both input and output VAT are shown on the main contractor’s return rather than being split between the main and the sub-contractor. The net result is the same as before – no VAT is actually due to HMRC.

Note that in this case there is no circular movement of VAT funds through HMRC (as with the current system) but the amounts are cancelled out immediately. In the main contractor’s VAT return

The VAT transaction for the final sales invoice is exactly the same as before. As the customer is the end-user the invoice does not fall into the RCS and the full VAT is charged. The net result is that HMRC receives £600 net in VAT which is the VAT charged to the final customer, the same end result as at present.

Because of the nature of contracts that fall within the CIS, many projects span more than a single VAT quarter. Also business may not have a VAT quarter that ends on 30 September 2019 so the transition from the current system to the DRC must be considered.  The treatments will depend on both the date the details are entered into the accounting system and also the date of payment.  The guidance gives the following dates:

The effect on businesses

Some business could find that they become net reclaimers of VAT rather than payers of VAT as they no longer have to account for VAT on some of their sales, but still have their own input tax to declare and reclaim. It might suit such businesses to move to monthly accounting to speed up the reclaim process. However, some business may also find that this causes problems with reduced cash flow as they could have less funds available to them at certain points in the VAT quarter as they have not charged, and therefore not received, the VAT on some of their sales invoices.

A business cannot apply the cash system for recording and paying VAT under the Reverse charge system; it must use standard VAT. This might mean that businesses are reporting under standard VAT for sales within the DRC and cash VAT for all outputs and inputs that fall outside the system. This may no longer mean that there is a cash flow incentive for using the cash VAT scheme. Neither can the reverse charge be used under the flat rate scheme so businesses involved in this might need to consider if it is suitable to continue to use the flat rate or to revert to standard VAT reporting.

The full HMRC guidance can be found here. 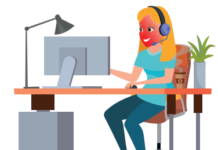 Take the bull by the horns